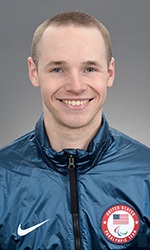 Readers of my blog are already familiar with my nephew Andrew Haraghey. Andrew contracted viral encephalitis shortly after birth, most likely as the result of a mosquito bite. The result of that was Andrew developing Cerebral Palsy , which effected his leg muscle development.
As much as Andrew tried, he never was able to run and play many of the sports kids his age were competing in. For some reason my sister Sheryl, (Andrew's mother) decided to get involved with an Adaptive Sports program. As part of that , she became a certified Adaptive Ski Instructor and volunteered with the adaptive program at Mount Snow in Vermont along with Andrew's younger brother Ryan.

Andrew found his niche through that program and quickly became a competitive skier. Many days you can watch Andrew walk and become concerned how he stays upright, but put him on a set of skis and he will scare the hell out of you as he flies down the ski slope many times exceeding 65 miles an hour without any fear and competing against some of the best skiers in the world.

Andrew just finished this past week skiing with his younger brother Ryan (a UCONN student) in Utah and now is flying off to the World Para Alpine Skiing Championships in Slovenia.

Best of luck Andrew, stay safe. Bring home the Gold and there might be a Big Mac waiting for you at the White House when you visit again.


From the US Paralympic website:
Personal: Andrew Haraghey took up skiing at age seven, and began racing in about 2010...He received the 2014 Bob Casey Courage Award from the Connecticut Sports Writers' Alliance in United States of America...At the age of six months, he contracted viral encephalitis, which resulted in cerebral palsy. He has severe muscle tension from the waist down...Son of Richard and Sheryl Haraghey...Has one brother, Ryan...Idol is Tom Brady...Hobbies include water skiing, kayaking, tennis, swimming and camping.