After eating quite healthy for a week, I decided that "eating in sin" was the way to go for this next dish. When I think of a baked potato, I always think of the baked potato that my mom or dad would serve with dinner - not even baked at all. Nuked in the microwave for about 10 minutes, slit in the middle, and served with a slice of butter. Not too fancy, and not too good - for me anyway. Way too boring and didn't excite my mouth. 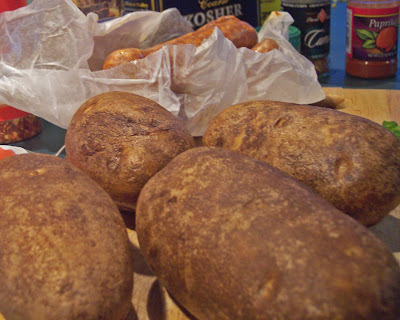 So I perused for a good LOADED baked potato and came across this recipe from The Noshery that I just couldn't resist. I fell in love with this recipe mainly because it had some meat in it - chorizo sausage. Perfect mix of spicy and pork. Some of my 2 favorite things.

This is definitely another quick fix meal for a weeknight.

Start by wrapping the potatoes with a damp paper towel and nuke them in the microwave for 10 minutes. When I first read that they were going to be nuked in the oven, childhood memories of bland potatoes came back to me and I was a little frazzled, but I gained composure and knew that these were no ordinary potatoes. Also, watch carefully that the damp towels don't dry up in the microwave, because I had a few potatoes that kind of melded with the paper towel, but it's nothing a little elbow grease and some water can't rub off.

Meanwhile, while the potatoes are in the microwave, heat up the chorizo in a skillet for about 5-10 minutes, until all of it is cooked and set aside. 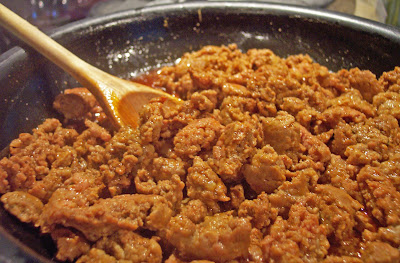 I got chorizo sausages and just removed the casing instead of buying a roll, because every time I buy a roll of sausage it seems that I never use the whole thing and it ends up going bad. This way, if I have extra chorizo sausages, I can just grill them up for a quick lunch. 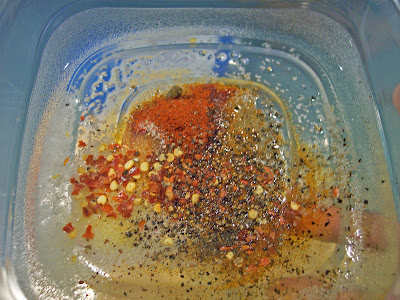 This was heaven in a bowl. This mixture could really be put on anything. Potatoes, veggies, steak, etc. I had to control myself from licking the spoon like it was left over brownie batter.

Brush a little bit of the mixture on a sheet pan and place potatoes on top. Score the potatoes and mash each one down. Not too rough though, still want the potatoes mostly in tact.

I almost lathered my potatoes in the olive oil mixture because it was THAT good. 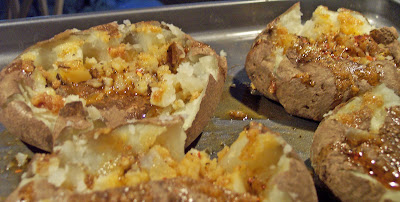 But smother as much on as you see fit.

Then place potatoes in oven for about 25 minutes, when outside is a bit crispy but potatoes are still tender.

Top however you like your baked potato, mine consisted of a layer of shredded cheese first (so it could melt on top of the hot potato), then LOTS of chorizo, sour cream, and a garnish of green onions. 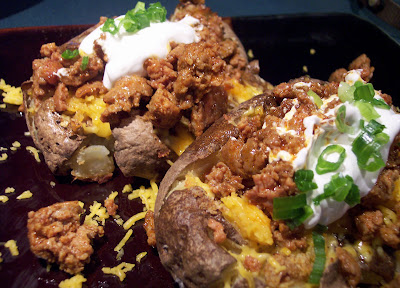 Boy was this delicious. I made 2 for the both of us, but I could only eat one. Starches are quite filling, but it was so good I had to save my pretty little potato for lunch the next day... and it was still just as amazing!