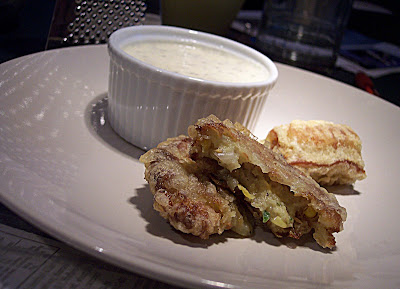 First of all, when I found out that I was a contestant on Foodie Fights I think I almost went ballistic. It was like that feeling you get when you get that neon pink Barbie Big Wheel for your 4th birthday. Yeah... it felt THAT awesome.

Then, I go to check out the secret ingredients and I just slumped. Eggplant?! I don't ever cook with eggplant. What the heck am I going to do with that thing?

And as the day progressed, all that I kept thinking about was fritter, fritter, fritter. Everything tastes good fried. Haven't had a single thing that was fried that wasn't good. So let's give this eggplant thing a try.

Before I could even start, I had to do my research. Had to check out my opponents, all of whom look like they know their stuff. Found out that eggplant has "nicotinoid alkaloids." And you're thinking... whata whata whata-oids?? Basically, a close relative to tobacco. So light bulb! Let's do a play on that and make eggplant cigars! I had extra wonton wrappers from making some tarts a few days ago and it'd be perfect.

During my research, I learned that eggplant is a good absorber. So I cranked the oven up to 450 degrees, salted and drizzled my 1 somewhat medium, somewhat large, purple eggplant and stuck it in the oven to roast.

So while I waited for the eggplant to roast, I started making a little medley in my food processor: 1 halfway seeded jalapeno pepper, 3 garlic cloves, 1 cobb of corn (taken off the cobb, of course), and 1/2 of an onion. Pulsed it to get a little chunky chutney of sorts and set it aside.

About 20-25 minutes later, my eggplant was hissing at me so I knew it wanted to get out. I let it cool for a few minutes and then peeled the skin. Now this next part is quite important. The eggplant, being the good absorber that it is, it very much made up of water and liquid, just like it's cousin the tomato, so it's very essential that you strain the eggplant! I left mine in a strainer on top of a bowl for about 30 minutes, checking on it every 5-10 minutes to turn it over or press it down to release some juices.

When the eggplant looks like it's about through leaking, I did a rough slice and put it in the food processor. Add salt, pepper, and a swig or two of white wine. Pulse a few times until well mixed and eggplant is kind of mushy, but still somewhat chunky. Add eggplant to corn chutney mixture. 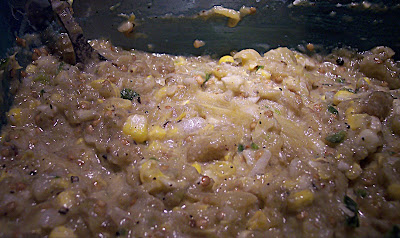 Fill large pot or saucepan with about 2 inches of vegetable oil and place on medium to high heat. You'll know when it's hot enough when you can flick some water on it and it sizzles. Or you can take it's temperature if you want to play on the safe side, about 350-375 degrees.

Take out your wonton wrapper and put a small spoonful of eggplant mixture in middle of wrapper. Roll up into cigars and fry until brown on all sides, about 2-3 minutes. As they brown, place on paper towel lined plate to dry. 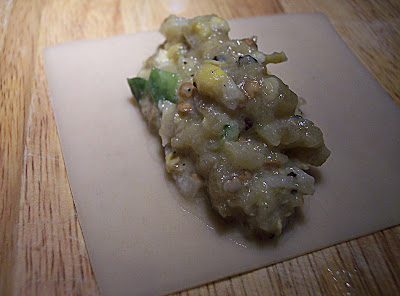 And wait, the title says DOUBLE FRIED. I had some tempura batter in the pantry so I decided to dip the fried cigars into that and fry for a second time. The tempura gives it a kind of sweet taste that makes you forget the cholesterol worries of anything deep fried. 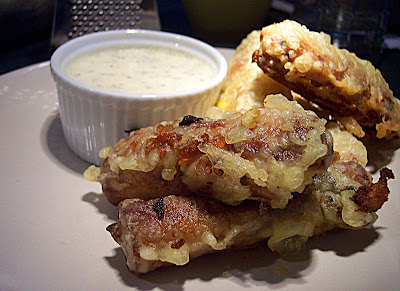 And wait, the recipe says cakes... don't get me wrong, the cigars were divine, but I had so much eggplant mixture, I had to have a back up plan in case the wonton wrappers didn't work. So I pretty much just took the filling and pattied them out into cakes, and followed the same procedure as the cigars. Just as good, if not better! Andy was the true taste-tester and did say he liked the cake better, but it was a tough decision. 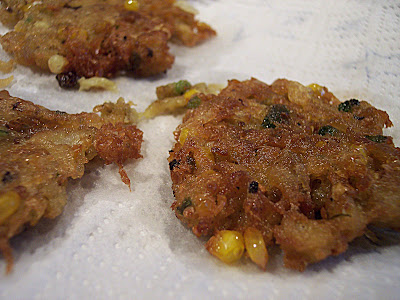 To set everything off, I made a white wine "icing." After all, you can't have cake without icing. 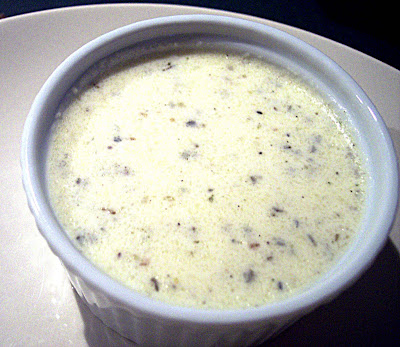 When the sauce cooled, I didn't like how thin it was, after all, it was supposed to be "icing." So I took out my electric beater and started whipping it. It got a tad bit thicker and it was perfect. The taste, the texture, and now it was time to see if it worked well with the cake. I split one of the cakes and slowly dipped it in the "icing." My fingers trembled as I slowly brought it to my mouth to have a bite. "Please be good, please be good." I crossed my fingers, took a chomp, and O-M-G... I was in heaven. The sauce was the savory component to the sweet cake. It was perfect and I was pleased! 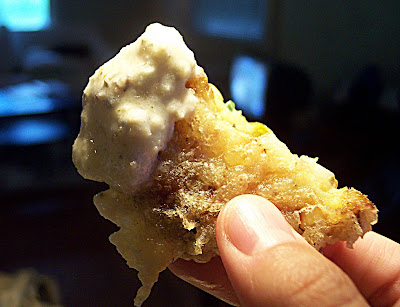 For my first ever Foodie Fight, if I don't impress anyone, I can still be happy to know that I greatly impressed myself. I was able to really think on the fly, with a down right challenging ingredient, and pull something out and have it taste delicious. This has been a true learning experience for me and just proved to myself more that I just LOVE LOVE LOVE to cook.