For My Sister... Green Beans And Bacon

Green beans and bacon is a common match in cooking. Growing up, this was the only way we ate green beans. I have never had the green bean casserole with the French fried onions. The holiday commercials make it look good. Especially the one with tree, grabbing the serving spoon... After posting Paddy’s Green Bean Supreme recipe, my sister sent me a note stating those would never cross her table. Why? There is no bacon in the recipe. I hate to say she is snob about it, but this is the only way she has eaten them for four decades.So for all of the non-adventure or risk taking green beans and bacon eaters, I hope you might like this recipe. Angela, this has one whole pound of bacon in it just for you. 1 pound bacon, cut up1 cup white sugar½ cup white vinegar﻿﻿5  14.5 ounce canned cut green beans, drained
2 large onions choppedDirections:In a large pot, cook the bacon and onions, until bacon is almost crispy. Drain on paper towels﻿﻿
﻿ 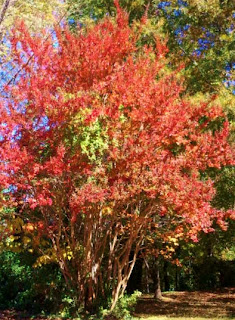 Fall leaves in North Carolina, at their peakAdd sugar, vinegar, and green beans to the pot along with the bacon and onions. Mix well
Cook until bubbling. Turn off heat and let sit on burner until ready to eat.   *I like to add ½ tablespoon of crushed red pepper flakes to the pot.This will give a little flavor without making them spicy*