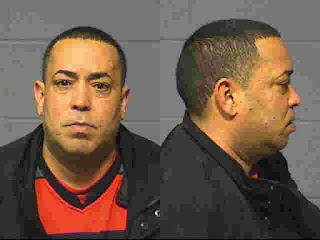 Joctan Hernandez
During the month of February, HPD Detectives from the Vice and Narcotics unit were contacted by the Windsor Police Department in regards to a business in Hartford that was selling "tainted" heroin.  Windsor Police were investigating a non fatal overdose due to possible tainted heroin.  An individual identified the G&T Barber Shop as the location where the tainted heroin was purchased.  HPD Vice and Narcotic Detectives were able to obtain a valid search and seizure warrant for this location.  Upon execution of this search warrant, HPD Detectives located 6 individuals inside the business.  A search of the business produced a bag inside a garbage can containing 46 bags of heroin, 17 bags of cocaine, and 4 bags of marijuana.  The Manager of the business informed Detectives that the drugs located in the store belonged to him.  The Manager was placed under arrest for drug related charges and transported to the Hartford Booking facility.  A second individual inside the store was found to be in possession of less than 4 ounce of marijuana and was issued an infraction ticket.  The heroin tested inconclusive for Fentanyl and will be sent to the State lab for further testing.