How-To: Break Down A Chicken 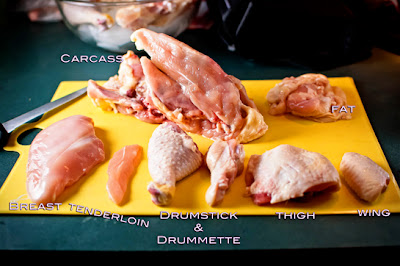 It's been almost a week, but I'm back with my first how-to post!  There are probably just as many ways to break down a chicken as there are ways to fix eggs, but the way I was taught in our second week of classes is by far the easiest way I've come across!

I did a Google search on "how to break down a chicken" and found video after video tutorial.  But I don't think I found a single post (or maybe Google just didn't recognize any) with a picture-by-picture tutorial.  I don't know about you, but I learn better with still images.  Videos are great, but I don't want to have to watch a whole video or pause every 5 seconds while I'm trying to learn how to do something.

So I can use the excuse that because there were so many pictures in this post, that that is the reason it took me so long to get another post up!  But we all know that isn't the case.  I'm just a busy bee - I had my first day in a restaurant kitchen last Thursday - It was definitely a LOT to take in, and a completely different scenario than cooking in my own kitchen (duh!).  So I'm excited about going back this upcoming Thursday and learning more!

Anyway, this post is going to be long enough, so I'm sure you want me to stop yapping!  Let's get to breaking down this chicken! 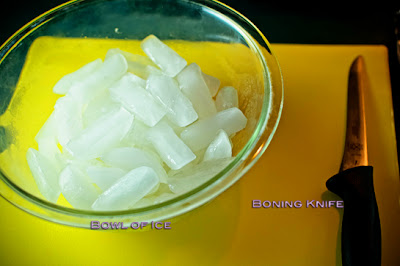 You want a bowl of ice so that you can keep your chicken at a cool temperature.  If you just set it out on the cutting board, 1. you'll run out of room quick, and 2. the warmer your chicken gets, the more it's prone to grow bacteria (and that's a bit gross, now don't you think?)  After each piece is cut off the chicken, you'll put it in this bowl. 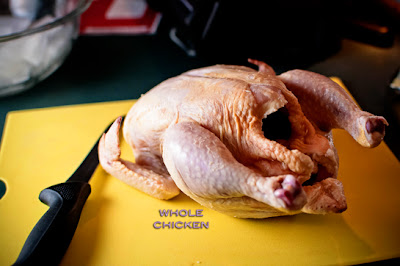 And I didn't label it, but it should be obvious... you'll also need a cutting board.

So the first thing we do is cut off the wing.  You'll want to spread the arm out and look for the ligament between the wing and the drummette. Most important part here is to cut through the cartilage (the soft cushioning between bones)... NOT through a bone. 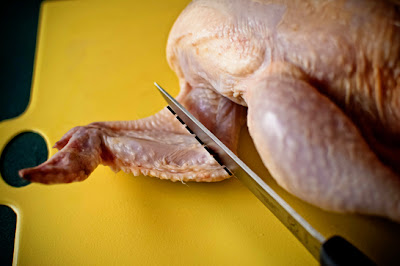 Use the dotted line as a guide 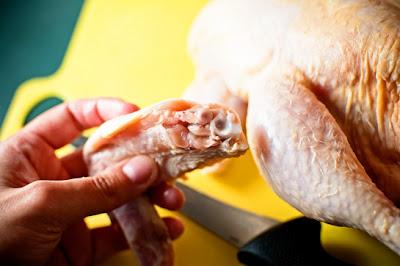 Right through the cartilage - if you have any resistance, you're cutting through bone, not cartilage.  Cartilage should be as easy as cutting through butter. And you'll want to do the same thing with the other arm/wing area.  (Every step will be done twice, obviously - so I won't restate the obvious from here on out.)

Next we'll take off the thigh and the leg.  It's easier to see what you're working with if you grab the chicken by both legs and sort of bend them down - this pulls the meat away the carcass and allows you to better see the "hip knuckle" that you cut behind next. 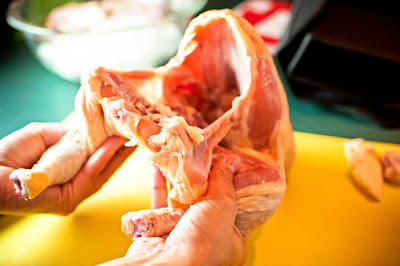 The knuckle should be in the crease between the thigh and the carcass.  Once you find it, you'll make your cut behind it, cutting the leg from the carcass. 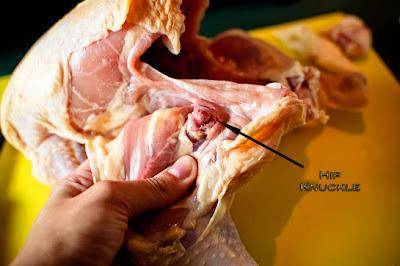 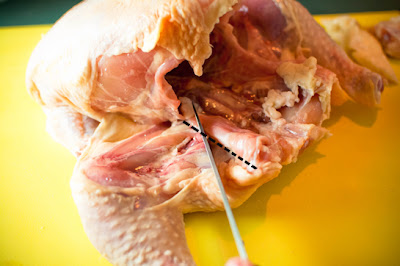 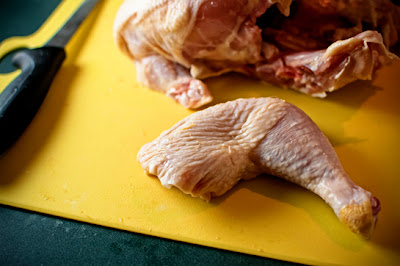 Cut off any excess fat, as desiredSo if you like having the whole leg quarter then you don't need to go any further.  But if you want to break this down even more and end up with a thigh and a drumstick, then we make this cut...

You'll want to find the natural fat seam between where the drumstick and thigh meet. 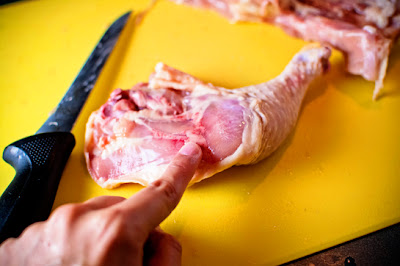 Then score against the fat seam until you can find the cartilage between the bones.  Remember, we cut through cartilage, NOT bones! 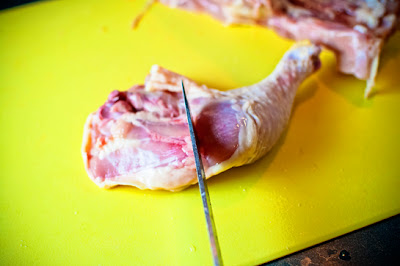 Then you can make a clean cut to have that leg separated into two pieces - the thigh and the drumstick. 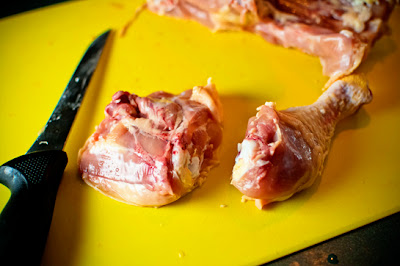 And the final components to remove from the chicken are the breast and the drummette.

You'll want to score the middle of the chicken until you find the Keel Bone. (It's a small flat bone that divides the chicken.  And technically, it's more cartilage than bone, but we won't get into specifics). 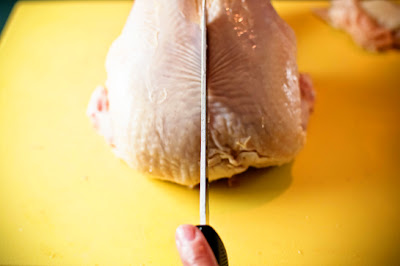 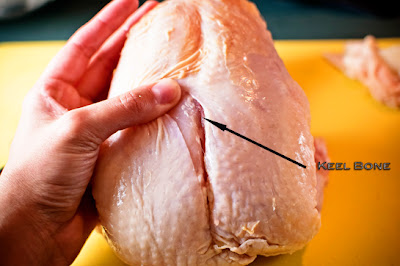 Once you find the Keel, you'll want to make long strokes along the side of it, running your knife along the outside of the ribs, as well.  You can pull gently on the breast to peel it away from the middle, but a good 4-5 strokes of your knife (if it's properly sharpened, that is) should do it. 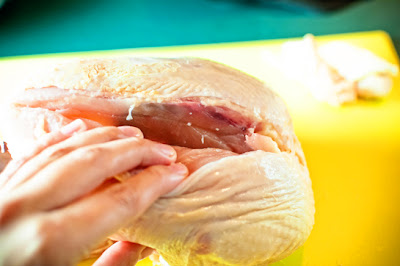 When you're close to having the breast almost removed, grab the drummette and breast in one hand. 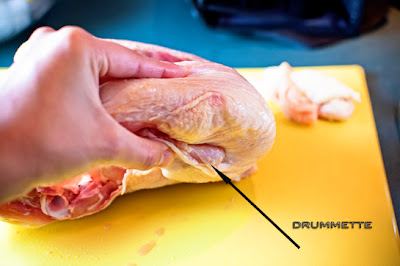 Find the cartilage in between the carcass and breast and make a clean cut through that cartilage to release the breast and drummette. 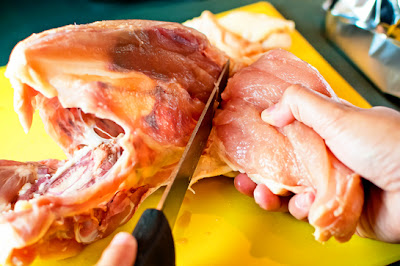 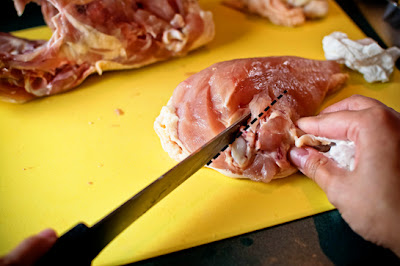 Remove the skin from the breast, if you'd like, and remove any excess fat. 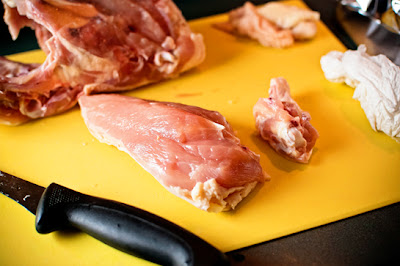 There should be a small flap-like piece of meat on the breast, which is the tenderloin.  Just lift it up and make a clean cut to remove it from the breast. 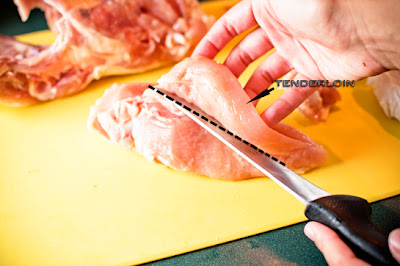 And you've got yourself a breast and a tender. 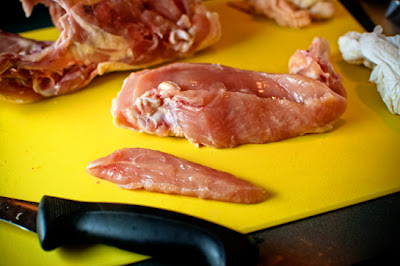 And now all you should be left with is a carcass! 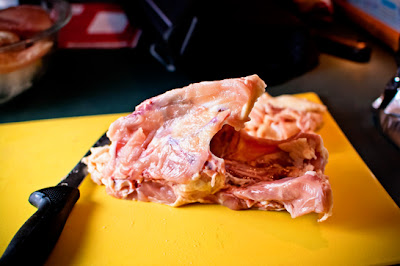 So I know this was long, but I hope it was helpful!  If not, it at least helped me "study"!  Knowing how to break down a chicken saves you money in the long run!  A whole chicken costs way less than the already cut up parts - and is an invaluable skill to possess!

In the next couple of posts, I'll be doing recipes with what to do with all that cut up chicken - so the only waste we will have had is the excess fat.  And honestly, if you wanted to, you could use it, but we don't want to be too glutinous over here!

See you guys in a couple of days!

How do you break down a chicken?  Was this helpful to you?  Do you like these "How-To" posts?