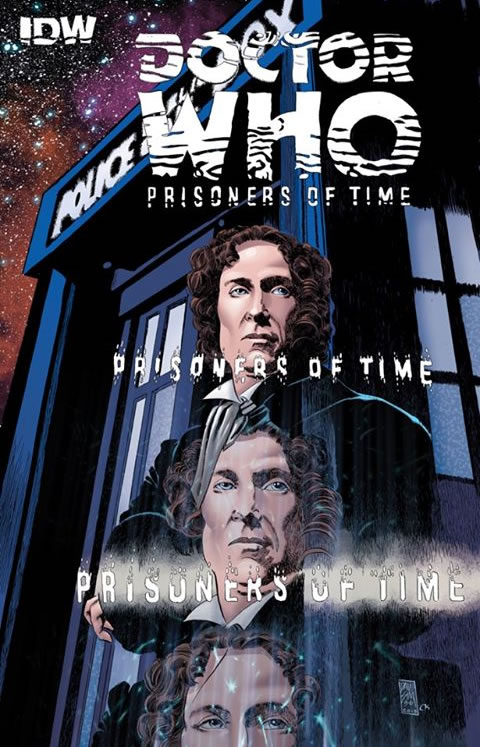 Doctor Who: Prisoners Of Time #8 (IDW, August 2013)
Art by Dave SimDAVE SIM:
This was in the "happy accident" category. The DR. WHO covers are done from official BBC publicity stills they've supplied to IDW. Basically what I would do is just click on each one for that issue's Doctor and then drag an image that showed potential onto my desktop. Usually: does this look like an Al Williamson drawing? In the case of Doctor #8, who has more of a Gothic look about him, I thought I'd look for a good Bernie Wrightson shot. It wasn't much of a contest. I liked this one. But I hadn't noticed it was a horizontal, rather than vertical photo (the vertical ones tended to fit perfectly in the available illustration space beneath the logo). So I tried to enlarge the print-out to 11x17 on the office photocopier but the photocopier was having a bad day. It's over 20 years old so it has more bad days than good days. Anyway, the printed image was too dark to see anything. But I was really stuck on this particular photo. So I decided to see, okay, how much space DOES it take up? And it took up a fair amount of space with all the excess space at the bottom once I had the Tardis "peaking" at the top of the cover. And that was when I got the idea of doing multiple images -- basically doing a relatively finished tight pencil on the primary image and then enlarging that 120% or so and tracing THAT off and then enlarging that 120% or so and tucking that in at the bottom. Which gave it a really good illustrative "Prisoner Of Time" look, I thought. Then it was really a matter of careful inking to make sure that I didn't lose the illustrative quality. This one's tied with THE COLONIZED #2 cover for my favourite IDW cover I've done so far so you might NOT see this one auctioned.