Josiah Spode II, 'The Gentleman's Magazine', Pots, A House And An Obituary 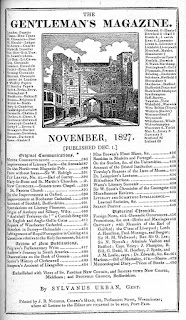 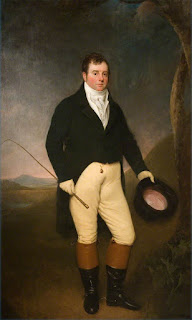 Josiah Spode II (1755-1827)In the Spode archive, amongst the many pattern books, shape books, print record books, catalogues and other business documents is a copy of The Gentleman's Magazine of 1827. A note on the modern paper cover and a reference in the index point to page 93 for the announcement of the death of Josiah Spode II.

Josiah Spode II (1755-1827) was the eldest of 8 children born to Josiah Spode I (1733-1797) founder of the Spode company.
'The Mount', mentioned in the death notice above was the home Spode II built for himself on his return to Stoke, after his time spent setting up and running the Spode business in London. Not far from the factory, but far enough to be in lovely grounds, it has been described as 'the biggest mansion ever built in Stoke'. 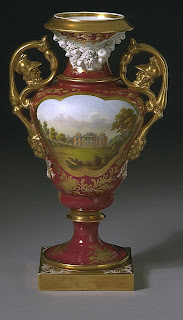 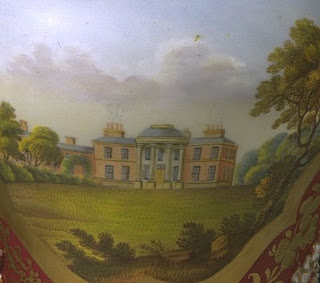 Detail of 'The Mount' vase 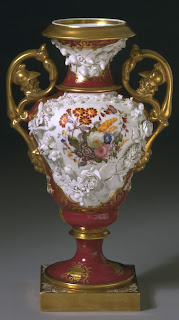 Back of 'The Mount' vase with handpainted & encrusted flowersI was intrigued to find out more about the style and contents of this magazine published in 1827. The Spode company was then, arguably, at the height of its success under Spode II, producing beautiful wares of superb quality - dinner, tea, dessert, ornamental and useful - exported all over the world. I have included some images of Spode pieces from around this period. 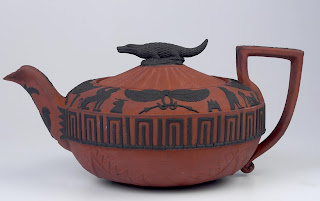 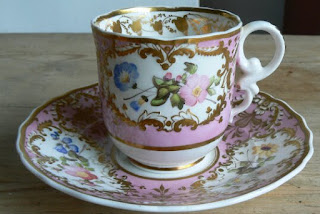 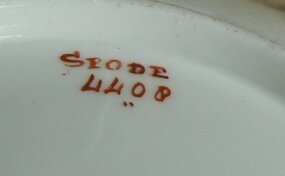 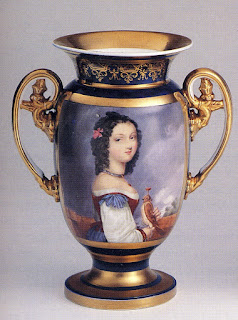 Superb bone china c1823So, what were gentlemen reading about in their magazine of 1827? What sort of world was it at a particularly successful time for the Spode company? On an initial look through I found the list of Obituaries but sadly nothing for Josiah seemed to be there... but read on.

Sections included discussions about Coinage, Defence of English Universities, New Churches, and other religious subjects including the Cremation of 'Hindoo Widows' and 'Druidical Superstition' and letters to the editor. Money, education, religion and opinions - nothing much different from the media today. 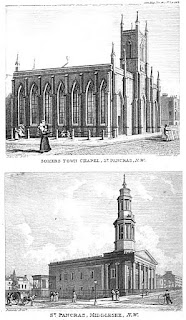 'New Churches'After the Obituaries were some statistics: a Bill of Mortality for one month June to July recording 2,428 christenings but 1,806 burials with 542 babies dying under the age of two. Below this were prices of hay and straw, prices of beef, mutton, veal, pork and lamb at Smithfield; then coal, tallow and candle prices. These were followed by share prices. The canals, vital to the pottery industry in Stoke, seemed particularly lucrative at this time especially Loughborough which was the highest priced share on the page. The meteorological diary seemed to give the impression of a typical English summer - fair with rain and showers. 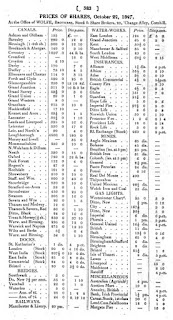 Share pricesBut my closer, and rather slow look through the whole book, many years prior to it being available online, revealed it contained not just the July issue but other issues up to December 1827. So, following a sudden inclination to read through all the obituaries in the later editions 'just in case' and hoping for more than the one line announcement , I was rewarded by finding the full entry for Josiah Spode II in the November 1827 issue (not entered in the index).

It is beautifully written and worth repeating in full here with original spelling and punctuation. It seems mostly factual but, just as in the media today, contains some basic errors. I have added corrections and a few comments in square brackets.

"JOSIAH SPODE ESQJuly…. At the Mount, Staffordshire, aged 73 [actually 72], Josiah Spode, Esq. Potter to the King.
He was born at Stoke-upon-Trent, where his father, in the early part of whose time the manufacturers of earthenware were few and small, had established a flourishing trade. He produced in perfection, and with great success, the blue printed services, then recently introduced; and the vitrified basaltes [sic] or black Egyptian ware were much improved by his efforts.

The son, now deceased, was from his earliest years remarked for intelligence and attention. When taken from school, his father [Spode I] employed him occasionally to superintend every branch of the manufacture in which his services could be available. At the early age of nineteen [actually 20], he married Miss Barker ['17 years and upwards'], daughter of a brother manufacturer. This union, in which neither interest nor ambition had part, constituted the mutual happiness of the parties, until the year 1797 [actually 1782], when the lady died in childbirth [actually from fever, leaving 5 children under the age of 7].

After his marriage, Mr. Spode's father and father-in-law, considered it desirable that he should settle in the metrolis [sic] [i.e. London in 1778]. In this he so abundantly succeeded, that in the year previously to the death of his father, which occurred suddenly in 1797, his net profits exceeded the sum of £30,000 [around £1.25 million 2019]. His liberality kept pace with his success; upon one occasion, he presented a diligent and confidential servant with a gift of £1,000 [William Copeland].

On his father's death, he committed the management of the London warehouse to his eldest son [William Spode] and the confidential servant alluded to [William Copeland], and settled his family at Fenton Hall [rented prior to building of 'The Mount'], in the neighbourhood of his manufactory at Stoke [about 30 minutes' walk away].

The establishment [i.e. the Stoke factory] was greatly extended [and modernised]; and, to the manufacture of earthenware, that of porcelain [now known as bone china], before established only at Derby, Coalfort [sic] and Worcester, was added. Mr. Spode's celebrity in this branch of his manufacture may be inferred from the circumstance that in 1806, the Prince of Wales, attended by the Duke of Clarence, the Marquis of Stafford, and several other noblemen, visited the potteries [and the Spode factory], and have appointed him potter to his Royal Highness.

In 1803 Mr. Spode erected a splendid mansion at the Mount, whither his family removed in 1804. There, at the Jubilee in 1809, he gave a splendid fete to all the gentry of the district, and as handsomely regaled the persons in his employment. In 1812 he erected a very large steam-engine on his premises, and made many important improvements. In 1823, having greatly enhanced the value as well as the beauty of his porcelain, he produced as a specimen, a large and superbly ornamented jar [another name for vase], of such elegance in form and embellishment, as to entitle it to the praise of a chef d'oeuvre.

Mr. Spode's liberality to his servants was proverbial; and, at his death, those who were in the more confidential offices, were distinguished by substantial proofs of the estimation in which they had been held."

This is a lovely contemporary précis of Josiah Spode II's life touching on both personal and business commitments and showing the high esteem in which he was held, as well as being able to give a good party!

'The Mount', a short distance from the Spode factory, went out of the Spode family some years later and here are details of its sale in 1875. 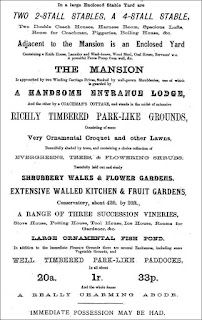 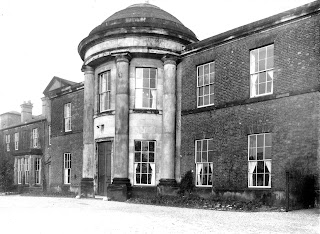 Hathi Trust where I found the book online
Peter Roden to whom I am always deeply indebted for sharing his meticulous research into the Spode family history with me.
V&A Online collections and staff/former staff Terry Bloxham and Rebecca Wallis

More about Spode II on my blogs:

Spode and London
Bone China
Spode and Showing Off
A Confusion of Spodes
Who Owned Spode?
and under S on my Spode ABC