I've obviously been on an egg kick, lately.  I don't know why, but I'm all about the little protein powerhouse.  Maybe because it's such a cheap commodity.  So easy to manipulate and do different things with?  Who knows. 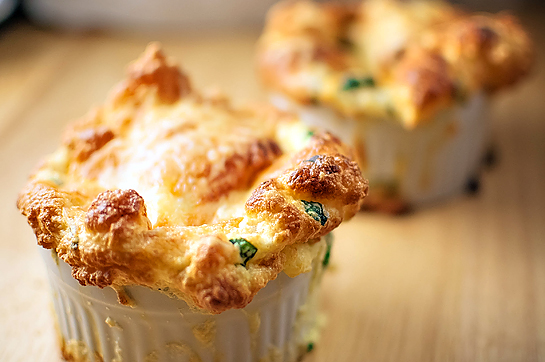 And I've never tried making a souffle before.  With a little extra time on my hands now that school is over for the quarter, I have time to conquer the unconquered.  I don't think I've mastered it, by any means.  But for a first attempt, I think they turned out rather nicely!

Heat a medium skillet under medium high heat.  Add olive oil and heat until shimmering.  Add shallot and cook for about 1-2 minutes, or until fragrant.  Stir in spinach and cook until wilted.  Season with salt and pepper, to taste.  Set aside to cool.

A lot of souffle bases don't require a bechamel, but I think it makes the souffle creamier and more delicate in the long run, so I highly recommend it.  In a medium saucepan, melt the butter.  Whisk in the flour and cook for just a few minutes, or until the flour is a light blond color.  Stir in milk, a little at a time, whisking constantly to avoid lumps.  Stir until all milk is incorporated and mixture is smooth.  Whisk in the cayenne pepper, nutmeg, and season with salt and pepper.  Bring to a boil and let simmer, whisking occasionally, for about 3-4 minutes, or until mixture is slightly thickened.  Take mixture off of heat and whisk in egg yolks, one at a time.  Transfer to a medium bowl and set aside.

Grease one large souffle dish or 4 mini ramekins (I had 4 inch diameter ones that made perfect side dishes).  Sprinkle inside of souffle dish or ramekins with a little bit of cheese.  Turn out mixture into prepared dishes and sprinkle with remaining bits of cheese.

Place dish(es) in oven and turn heat down to 375 F.  Bake for about 25 minutes or until souffles are risen and golden brown on top.

Carefully take out of oven and admire your accomplishment!

I had a little bit of a deflation in one of my souffles, but that's expected with any first try, right?  Right.  But the result was an airy, creamy spinach souffle that won over Andy (who, I could tell, was a bit skeptical of having souffle as part of our dinner). 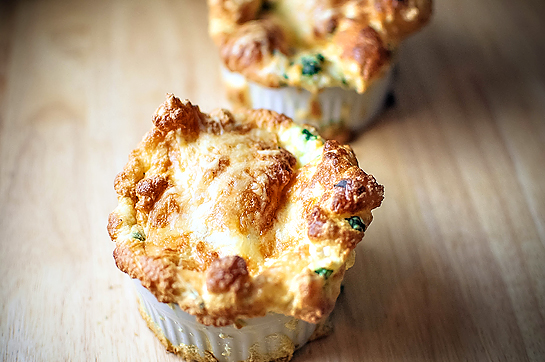 Have you ever made a souffle?  How did your first go at it go?