1) Resort Fee
For those who have never been to Las Vegas, just a heads up that there is an additional resort fee of $15 (compulsory) in addition to the rates reflected. I actually really dislike this lack of transparency, although it's very common in all the hotels in Las Vegas. If you are going to make it compulsory anyway, you might as well reflect it in the cost.

2) Club Tower
If you are going to stay in the Club Tower instead of the Paradise Tower, be prepared for a longer walk where you have to go through the casino, take an escalator up, walk through a passage where the restaurants are located before turning into the lift.

3) Rooms
The next few pictures show the condition of the room we were staying in. Very comfortable bed and pillows. Great housekeeping services too and our room was kept really clean. Large TV screen- although that does not translate to good programme selection. Well, I suppose I shouldn't really complain because people do not go to Las Vegas to watch TV.

This has got to be the first hotel I have stayed at that doesn't give free bottles of water. We tried getting a bottle at the casino (the really small ones) only to have the lady holding the tray of bottles say, "they are taken". We ended up at the small store which sold two bottles of Tropicana Water- 2 for $5 for the 1 litre bottles. 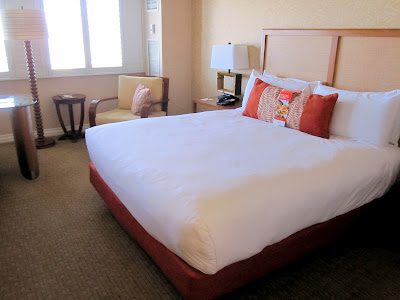 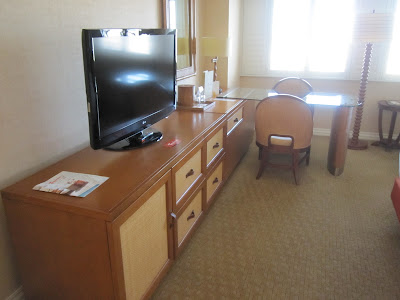 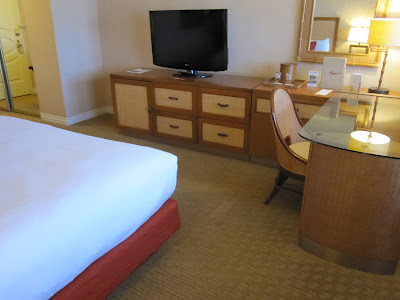 4) Toilet/Restroom
The toilet is clean but visibly old. The shower was problematic because we had to use a lot of force to pull the tap out in order for the water to flow. I didn't use the bar of soap because it terrified me that the colour on the wrapper of the soap bar runs, making the soap bar red. I'm not sure if this reflects the quality of their products but I would rather keep a safe distance from them. 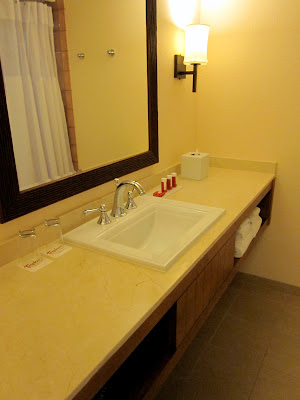 5) Amenities
We didn't use the pool facilities/gym but it looks like a cool place to hang out. The number of eateries are very little compared to the other major hotels. But this really isn't much of a problem since you can catch a bus or walk to the other hotels with a much bigger food court and food variety. 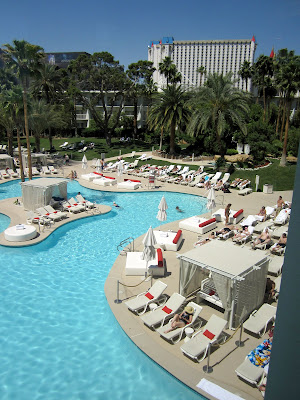 6) Service
This is my biggest gripe. If there is one reason why my stay wasn't that pleasant, it's because of the bad service. The first snub I got was by the guy at the Concierge. We were trying to ask for help as to how to get to Caesars Palace. It's my fault that I said "Caesars Place" instead of "Caesars Palace". But you simply do not return me an incredulous look and to signal using your hands, a sign showing a pair of scissors. I'm not sure whether he was making fun of my English (just because we speak in different accents doesn't give you the right to do so), or whether he genuinely thought I wanted to find a place called Scissors Place.

And then, he simply told us to take a bus from opposite if we wanted to get there. Very helpful, sir. Not a word on the price or how we could get to the opposite of the road, especially since we didn't even know where the bus stop was.

The second incident was after checking out. We were getting through the door when I distinctly saw one of the guys at the taxi stand roll his eyes at us and he did not offer any help although he was just standing around and there was no queue at the taxi stand.

7) Getting here from the airport
I would highly recommend taking a shuttle (we took Executive Las Vegas) from the airport for $6 per person. I would not suggest buying a return trip and instead to call up the shuttle company to arrange a trip to the airport one day before you leave the hotel. Make sure you ask to be picked up at least half an hour earlier than what you would want because they would have to pick other people from other hotels as well.

8) Location
This is on the South end of the Strip and pretty far away from all the action. But I would highly encourage you to get a one day pass ($7) from the bus stop at MGM (ask the people at MGM for help) and that gets you all around the Strip, Premium Outlets and Fremont Street.

9) Overall
Even with the resort fees, I think this place is decently priced and it's easy to get around with the bus. Service was not great for me, but I don't think the same would happen for English native speakers who do not have a very different accents.