We Need To Talk About Kevin

After reading this book in a few days, all it gave me was a headache. Don't get me wrong, the prose was beautifully written. But sometimes too much of a good thing can be a bad thing, and this happens to be one of them. The book is thick, probably because Lionel Shriver tries very hard to drive home the point that Kevin is nothing but a disaster. At the same time, she tries to paint his mother (or Mumsey), Eva, as a person who sees nothing good in him, and his father, Franklin, who appears to be very much deluded. She also later has a daughter, Celia, who is someone Eva treasures a lot, partly due to her need to communicate with someone. 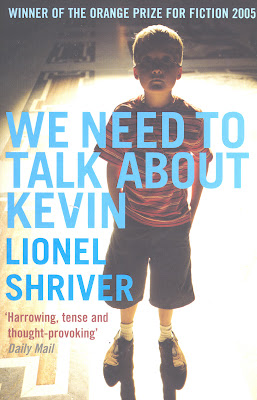 Well, if I say anymore, there may potentially be spoilers, which will definitely ruin the read, especially since the surprising bits only appear towards the end of the story. To put it in a nutshell, Kevin is some teenager who went on a high school massacre. He has displayed traits of a sociopath since young, where Eva is adamant that he is just evil and Franklin denies Eva's suspicions, leading to a subsequent crack in their marriage. This book is a series of letters written by Eva to her husband.

Plenty of quote-worthy material in Lionel Shriver's writings- beautiful. But unfortunately, as though she was drawing in circles, she could have skipped a few parts here and there and it would not have made a difference. I speed read through the middle because it got a little dry and dreary. Content wise, I'm not sure if this reflects the personality profile of a high school shooter in reality. But, in all, I think one of the prevailing themes is, of all the concerns that parents have about having kids, who ever thinks that one day their kid might be a murderer?